In addition to the many historical attractions, charming viewpoints and nightlife considered to be among the best on the old continent, the city is multicultural and hospitable, and offers a rich and varied cuisine.

A cosmopolitan city open to the world, it is becoming the European capital of entrepreneurship.

In 2018, the city was distinguished with the European Green Capital 2020 award.

The Faculty campus is 20 minutes away by transport from the main landmarks of the city of Lisbon and 10 minutes from the center of Almada (where FCT NOVA is located).

The price of a transport ticket in Lisbon can vary depending on the area and the mode of transport. The best solution is to purchase the “Navegante” pass (Single Monthly Ticket) that allows you to ride all public transport in the metropolitan area of Lisbon by train (train), metro, boat, bus (bus) and tram. 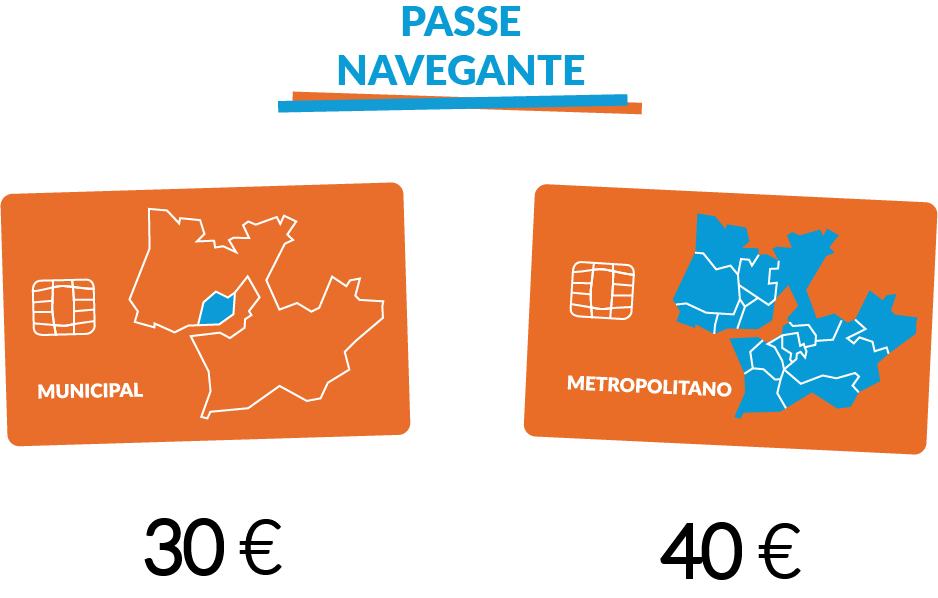 In addition to public transport, you have other mobility options, all with apps that allow you to travel by car, scooters, motorcycles and electric bikes. Among the best known services are Taxi, Uber, Bolt, Gira, Jump, Hive, Lime, Circ, eCooltra, Freenow.

Another good alternative is to be part of the Via Verde Boleias FCT Group, an exclusive carpool group that allows the sharing of trips in its own car, linking the demand and the offer of rides, making the division of travel costs simpler.

NOVA School of Science and Technology has a student residence prepared to receive you!

Students who have enrolled at the college and intend to apply for a vacancy in the University Residence Fraústo da Silva (RUFS) should contact the Social Services of the Universidade Nova de Lisboa (SAS / UNL) directly.

NOVA School of Science and Technology is also a partner of the “Houze” Residences, which give priority to our students.

In addition to these options, there is a great offer of rooms or houses for rent, with prices varying between 300 and 900 euros (depending on the area) in Lisbon, and 250 and 650 euros in Almada.

Here are some examples of prices, both in Lisbon and in Almada (where the campus is located): 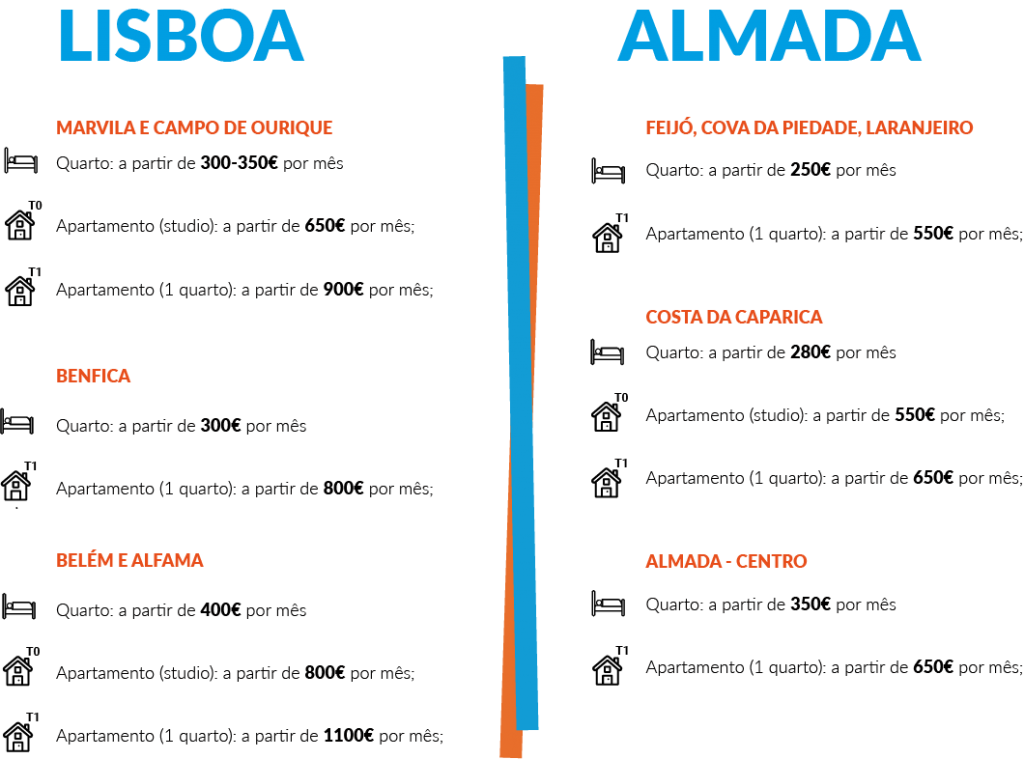 NOVA School of Science and Technology provides the Portal do Alojamento,, an online space with listings of houses and rooms for rent (in this case, you should contact the owner of the accommodation ad you want directly).

If you need to eat out, the average price is around 7.50 €, in cheaper restaurants, and 10 € in average restaurants.

As a rule, the monthly average of food expenses in Portugal is around 250-450 €

The Portuguese language is the 6th most spoken in the world but has many variants. Even in Portugal, although the country is small in size, it is large in the amount of pronunciations. It is not spoken in the same way in all regions. Even the slang can vary depending on the area of the country.

According to Time Out Lisboa, the real Lisboeta thinks he has no accent, but there is a way of speaking that is characteristic of the Portuguese capital. “The so-called syllabism” or “etymophagy”, expressions that describe the strange habit of eating syllables. Each conversation is like a spoonful in an invisible letter soup.

If the same language has different expressions within the same country, the same happens with countries that share Portuguese. However, this is no reason to be scared. Portuguese people speak English very well and do the most common vocabulary in Portuguese-speaking countries and they always make sure you understand them. The Portuguese are a very hospitable people, they receive many foreigners all year round, so be calm about communication.

Portugal is rich in gastronomy having already created several icons worldwide. Among the best known are pastel de nata, bacalhau and port wine. In addition to these stars that are representing the country abroad, we are also recognized for fish dishes, olive oils awarded worldwide and of course the wines.

In Lisbon you will find a wide variety of restaurants and taverns (botecos) where you can experience the best of traditional Portuguese food, with a strong Mediterranean component. But if this is not on your palate, Lisbon has an intense list of restaurants on offer in the most diverse cuisines, from Asian to Brazilian.

One of the advantages of studying at NOVA School of Science and Technology is precisely the proximity to this multicultural gastronomic environment.

Lisbon attracts more and more visitors and with good reason. There is no way to be bored in this city.

Stay informed of events that take place in Lisbon  and Almada

One of the best modern tourist attractions in Lisbon, the Oceanário was built as part of the 1998 World Exhibition. Located in Parque das Nações, in the northeast of Lisbon, this is the largest indoor aquarium in Europe. It is organized into four unique habitats, each representing a different ocean. In addition to all types of marine life, from sharks and rays to penguins and otters, the flora and fauna of each ecosystem are also represented. Strolling in the aquarium of colorful fish with tropical birds flying overhead offers an immersive experience not to be missed.

The most bohemian and oldest neighborhoods in Lisbon. Chiado is the place where you can find old cafés, bookstores, elegant boutiques and historic theaters. Bairro Alto is a quiet area during the day and famous for its nightlife, with many restaurants, fado houses and bars for all tastes.

Cristo Rei, inspired by the statue of Christ the Redeemer in Rio de Janeiro, rises above the southern banks of the Tagus estuary and is one of Lisbon's iconic monuments. It is also one of the best viewpoints in Lisbon, with incomparable views of the suspension bridge and the city.

4. Terreiro do Paço / Praça do Comércio

Probably the most historic square in Portugal. It was here that the first caravels that arrived in Brazil were left and that the end of the monarchy was witnessed in 1908, with the murder of King Dom Carlos I and his eldest son. It was also a turning point in the revolution of April 25, 1974. In the center stands the impressive equestrian statue of Dom José I, indicating the royal roots of the square as the location of the Palácio da Ribeira (before the 1775 earthquake). One of its greatest attractions is the triumphal Arch of Rua Augusta, which has a special golden glow at dusk.

Towering over Lisbon, this 11th century fortification is one of the city's biggest attractions. A mandatory crossing point with a special comfort of the walls and patios in the shade of centenary pines, and, of course, an overwhelming view.

High point of Manueline architecture, this monastery is the most remarkable monastic ensemble of its time and one of the main hall churches in Europe, with a historical and cultural importance that deserves the recognition of UNESCO as a World Heritage Site. Vasco da Gama's tomb is very present at the entrance to the church of Santa Maria.

Arguably one of the most emblematic historical monuments of Lisbon that crouches in the shallows near the mouth of the Tagus River and is a symbol of the extraordinary Age of Discoveries in Portugal. Originally located in the middle of the river (the watercourse has changed over the years), the tower represents the highlight of Manueline architecture which, given its value, is protected as a UNESCO World Heritage Site.

The natural degradation of some of the buildings creates a comforting and nostalgic atmosphere, offering one of the most beautiful walks in the municipality of Almada, always parallel to the river. Whether for a meal or a drink, its restaurants “Atira-te ao rio” and “Ponto final” are mandatory stops.